Skateboarding is a sport with adrenaline rushes and an array of health benefits. However, since it involves a ton of rigorous movements, making pressure on the knees and ankles, things go questioned sometimes.

So, is skateboarding bad for your knees? Especially with immense pressure on them on every move you make?

Even though from the outlook, it may look dangerous, your knees are in that much danger. But you need to master the art of maneuvering on the surface with your skateboard to keep your knees safe.

We have seen numerous mishaps and stunt-fails that skateboarders encounter and end up with bad knees. Let’s get into the topic and see if it’s dangerous to skate around and how you can keep your knees safe during the ride.

Is Skateboarding Bad for Your Knees?

Skateboarding for an extending period can affect, if you’re a beginner. The consistent exertion on the knees, ankle, hip, and thighs can cause a tilted pelvis/pelvis misalignment. It even can cause uneven leg lengths. In addition, recursive slamming against the floor or objects can bring about chronic pain.

An American pro-skateboarder Chris Coleman said, “In the last 20 years I’ve been skating, there hasn’t been a single session where I felt 100%–not feeling any pain”. 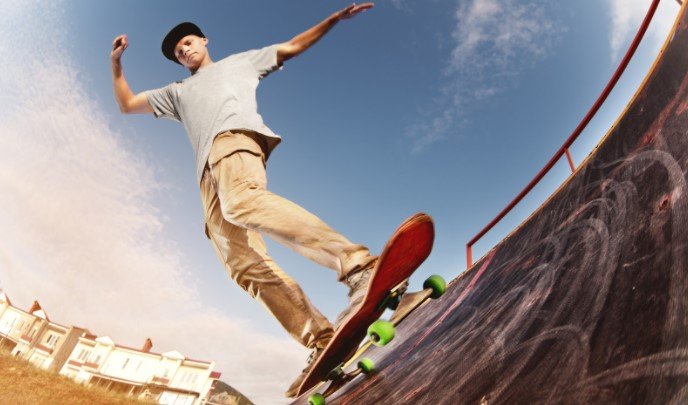 With that said, is skateboarding bad for your knees? Well, not really, it in fact will help you strengthen your legs and the rest of your body if you ride it properly. For that, start with a budget friendly skateboard, practice with it, and perfect yourself before you go into the stunt arena.

For now, let’s see the most common issues you might face with skateboarding and knee joint issues.

Sprained Knees in skateboarding are the most common issue when it comes to knee safety. If you somehow end up moving wrongfully, especially while doing stunts, this might trigger. In that case, you must take it slow and learn the best practices before doing stunts.

Hot pockets and knee bruises are also common in skateboarding if you bent without control. In that case, you may feel severe pain in your knees and the surroundings with rashes. You should stay away from boarding for a week or so to recover from that.

Skateboarders are more prone to fatal injuries when they perform extreme stunts without protective gear. You can impact your body while performing extreme stunts, not landing properly, or not wearing protective gears. Performing aerial stunts can also cause knee injuries. Practicing this frequently can tragically cause arthritis at a young age.

What Are the Skateboarding Knee Injuries?

The current rate of extremity injury is at about 74% for skateboarders. Injuries are also possible if you fall on your left or right leg more frequently.

Skateboarding injuries are not irregular. Every experienced skateboarder has had one skating-related injury, one time or the other. The extremity of the injuries can vary from minor bruises, sprains, recurring aches, cuts, bone fractures, or even worse, death. 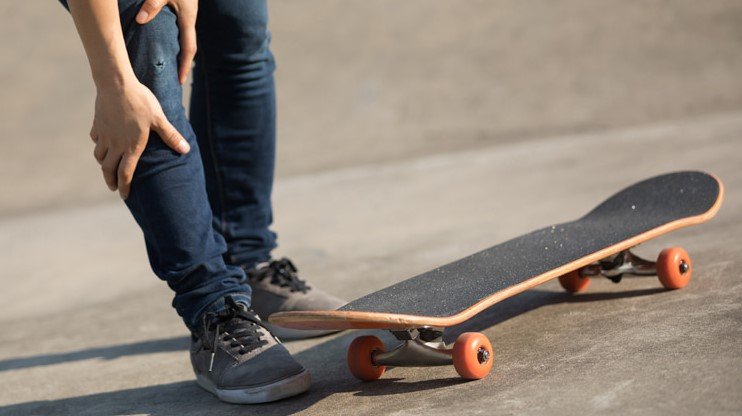 Knee-related problems are not so frequent but can be grave dangerous when happens. Occasionally, you might experience hurt in your knees as a warning of something wrong. Always ensure to pay adequate attention to whatever knee pains you have because they can be a sign of the near occurrence of these:

The meniscus is tough C-shaped cartilage within the knee joints that functions as a shock absorber between the thighbone and shinbone. It absorbs forceful impact and disseminate it throughout the leg(s). Athletes are susceptible to this kind of injury more than non-athletes.

Meniscus tears happen when the knees are twisted and turned abruptly. Forceful rotation of your knees—especially while putting your whole body weight on it—can lead you to a torn meniscus. These kinds of movements occur a lot in most sports, skateboarding inclusive.

The Medial Collateral Ligament (MCL) is a ligament that prevents the knees from overstretching or collapsing inwards. It does this via numerous other muscles and ligaments. In addition, the MCL spreads out to give the knee great supports from different angles. It also protects your knees from snapping when you perform your risky stunts.

MCL injuries usually occur in all athletic activities and can be treated through immobilization and rest, physiotherapy, or even surgery based on the extremity of the injury. However, given that the MCL and meniscus are connected, it is not unusual to injure both of them at once. Symptoms of MCL injury are very similar to meniscus injuries. They include pains, swelling in the joint, pains while stretching the knee, internal knee bruises, etc.

The third dire injury of the knee is the ACL injury. The Anterior Cruciate Ligament is a tough, thick ligament whose purpose is to inhibit movement from the anterior tribal rotation and anterior tribal translation. This ligament is paramount for rotational stability.

Injury in the ACL occurs when you abruptly stop your movement or change direction with full weight on your feet. It occasionally happens in sports involving dynamic movement and direction, jumping, and landings, such as basketball, soccer, downhill skiing, and skating.

Most people feel a “popping sensation” or hear a pop sound when they have ACL injuries. The severity of your ACL injury might require you to rest, rehabilitate, or even undergo surgery.

How to Strengthen Your Knees for Skateboarding?

As humans, our bodies weren’t created for skating. Noting this makes it easier to understand why you feel easily worn out while skating. Skating on concrete or tar floor, and exerting much weight on your joints, ligaments, muscles, tendons, etc., can easily wear you out.

Your muscles act as miniature force fields around joints. The more enhanced they are, the more pressure they can withstand. This simplifies how much weight is received by the joints. The majority of skateboarder’s injuries happen at the knees or ankles.

You can enhance yourself by improving the strength capacities in the regions around your ankles and knees. This provides extra protection against sprain, but it also helps provide stability and minimize chances of injuries and joint degeneration with time.

Here are a few exercises you can partake in to strengthen your knees for skateboarding:

Skateboarding is a very energetic, passionate, and a thrilling sport. But if you’re asking is skateboarding bad for your knee, now you know when it is and when not.  It has its ups and downs, and most victims of skateboarding accidents usually lose their balance or jump too high and don’t land well.

Even though from the outlook, it may not look as risky as other extremist sports. It sure has its own set of benefits apart from the complications.