Riding with a skateboard has moved beyond only fun. Before now, skateboarding generally had a close association with teenagers who fly around any neighboring skatepark. However, lots of people now ride skateboards besides fun for other practical purposes. It has become a means of commuting for some individuals.

We’ll discuss the dynamics of skateboarding to unfold if it’s faster than running through this article. Also, we’ll expose the factors that affect your skateboard speed.

Is Skateboarding Faster Than Running?

It’s no longer a hidden fact that many people use skateboarding as their means of daily commuting. This happens commonly within areas where skateboarding has no strict regulatory measures against it. That’s why they often ask is skateboarding faster than running.

Depending on the different skill levels of riders, skateboarding has an average speed of about 9 mph. This average value can change based on the other factors besides the rider’s skill level, such as terrain, board setup, and others. Experienced skaters move at about 7 to 8 mph through flat terrain over a distance of 1 to 2 miles. However, the general skateboarding speeds lie within between 5 to 7 mph.

In most travel surveys, you can conveniently deduce how, where, and the number of people that often travel. Though lots of these reports exclude skateboarding as a mode of traveling, their notable measurable amount in most developed cities remains noticeable.

Los Angeles gets more than 25,000 transit skaters that move from train stations and bus stops daily. The story is not different in Oregon, Portland, and other cities. You can sight skateboard riders within several intersections – at least one within every seven minutes. Greater numbers of skateboard riders prevail within and around college campuses.

Comparing the Speed and Energy Expended in Skateboarding and Running

When you are running, your two legs hit on the ground but one at a time. There’s a force that impacts your body as your first leg hits the ground, causing your center of mass to follow a parabolic arc. Once the first leg hits the ground, the initial launch force will propel the body to move forward. However, it’s the opposing force that will drain energy from your body. This happens between your two legs and at very short intervals. Thus, you will spend more energy.

But when you’re skateboarding, it’s only one of your legs that hits the ground to produce the propelling force that pushes you forward. Also, while skateboarding, the intervals you hit the ground is longer. So, though the opposing force will drain some energy from you, the rate is reduced. This’s because you’ll take a long time before hitting your leg on the ground to keep moving forward. Thus, you will expend more energy while running than skateboarding.

Factors That Affect Your Skateboard Speed

Though skateboarding is faster than walking or running, some factors can affect your skateboard speed. Understanding those influences on your skateboard will help you in selecting the right one for transportation. Some of the factors include 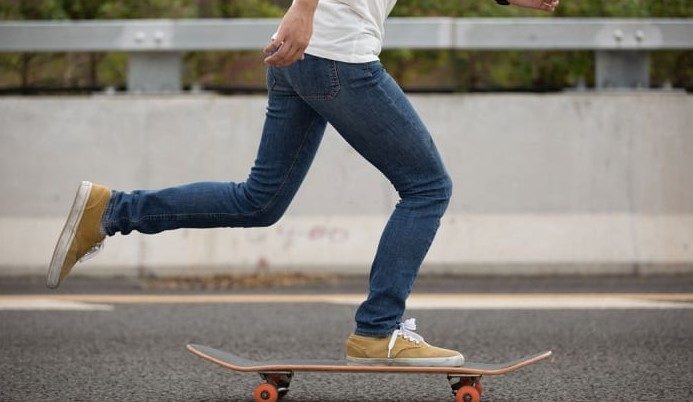 The skating Terrain and Condition

The type of surface on which you ride has a great impact on your speed while skateboarding. For example, moving through rough and cracked ground retards your motion significantly. In addition, the cracks and rough surfaces will stick to the wheel of your skateboard, distorting your ride more frequently.

Also, riding with a small wheel through cracks and rough surfaces easily throws you off the board. You will need to swerve more in your ride, which will invariably reduce your speed. The best way to move through cracks will be to jump over them, which is only possible for experienced riders.

Furthermore, the sloppiness or flatness of your riding terrain matters and affect your speed. Commuting through flat and downhill terrain is easier and faster. Such rides are usually without stress and move at higher speeds. However, if you move through an uphill, your speed will go down.

In addition, there could be stairs, roadblocks, and street corners that should slow down your speed. Irrespective of how highly skilled you may be, skateboarding through the street demand that you move slowly. With the presence of stairs through your shortcut route, your commuting speed will also decrease.

The condition of your riding environment plays a role in your speed. For example, a ride through busy areas with more vehicles and pedestrians demands reduced speed from the skater. Though you may be an experienced skateboarder, your speed will reduce while dodging pedestrians and road users.

Moreover, commuting on the same roads with other vehicles requires maintaining a considerable safe speed to avoid collision with vehicles. Besides the vehicles and pedestrians, you must obey the traffic lights and signs. Thus, you may have to stop as the light goes red to ensure your safety and maintain orderliness.

No skateboarder got it perfectly right from the first day of skating. There’s always the nervous and uneasy feeling at the beginning stage of skateboarding. 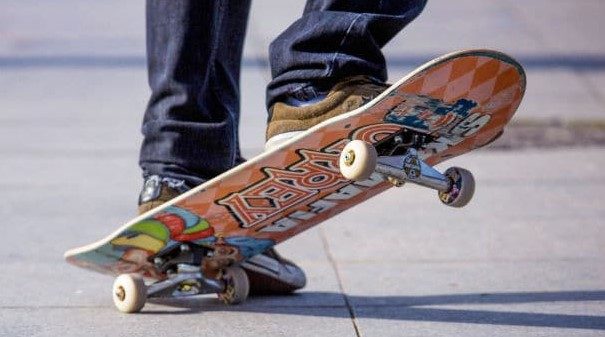 Also, your movement will be slow as you try to move through your route with any prior experience. However, your speed increases with time as you practice moving and learn more skills to maneuver through routes and obstacles.

The weight of the skateboarder impacts the average speed that he can move with. This is because the weight has a direct connection with gravity as well as momentum. If the rider is heavily weighted, the force of gravity on the skateboard will consequently increase.

Momentum has a direct relationship with speed. Thus, the heaviness of a rider will result in higher momentum and an increase in speed.

The Setup Of The Skateboard

The wheels have a major impact on skateboarding speeds, particularly the size and nature of the wheels. With bigger wheels, you can move faster than with small wheels. This’s because the big size of the wheels allows it to cover move spaces through its complete rotation. But smaller wheels will move through several rotations for the same distance more than bigger ones.

Also, using softer wheels add more advantage to your movement. They are better shock absorbers from rough or cracked surfaces. Also, their gripping ability is higher than the harder ones. Though their rolling speed is slower, their cushioning effects give them more leverage over the harder ones. A combination of bigger and softer wheels will enhance your skateboarding speed.

The bearing of your skateboard is a crucial setup that will affect your commuting speed. With other factors kept constant, better bearings are excellent speed improvers for your skateboarding experience.

Length Of The Board

The lengths of boards categorized skateboards into longboards and regular skateboards. While the former has longer boards, the latter are the regular ones with shorter boards. Also, the board’s length affects its average speed.

Longboards move with more speed through different surfaces. They move excellently fast, even in asphalt, cracks, and stony surfaces. Their larger boards and stable speed allow easy push to produce an average 8 to 9 mph speed.

However, when it comes to flipping and maneuverability, the regular skateboards are the best. They are more portable and can perform lots of skating tricks that create fun.

Also, you should know that some of the factors that can affect your skateboarding speed include your skateboard setup and your riding skill. Others are the terrain your commute through and your body weight.