Since they first appeared on the market in 2015, hoverboards have become a huge hit. More than 300 injury cases have been filed to the Consumer Product Safety Commission because of this craze (CPSC), which answers the question (why are hoverboards illegal?). The new law for hoverboard has become a major issue because of this. Some brands have been recalled because of other safety risks such as overheating, flames, and explosions.

These include Power board, iMoto, Hype Roam, Swagway X1, Mobitech, 2Wheelz, Wheeli, and Hover Shark, amongst others. These hoverboards were sold with a warning that the purchasers should immediately stop the use of them and get in touch with the seller to get a complete refund or replacement.

In addition to hoverboard safety precautions, what about road safety? The usage of hoverboards must be regulated in the same way as any other fast-moving travel item.

Therefore, below are the new laws for riding, especially high-weight capacity hoverboard, and hoverboard dangers 2022.

But before we go there, let`s look at what the old law used to say about hoverboards.

As the Metropolitan Police Department noted in a recent tweet, “hoverboards were prohibited,” the (CPS) – Crown Prosecution Services website verified this year. Section 72 of the Highways Act of 1835 contains the complete text of the laws regarding the usage of hoverboards, which states that they are prohibited on public roads. Hoverboard laws state that sheep, mule, swine, cow, and horse are also prohibited from being on the street. This law further specifies that anyone who violates it must forfeit and pay a sum not to surpass the damages they create. 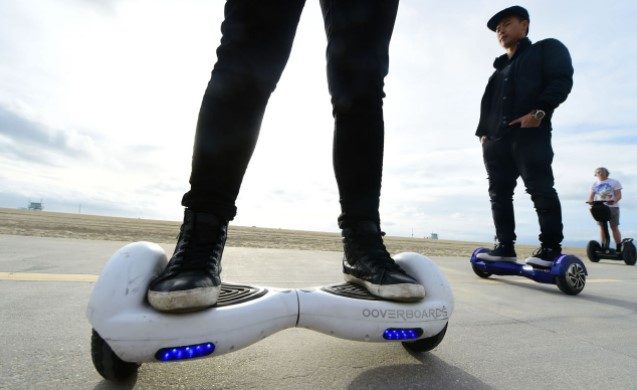 New Hoverboard Laws In Other Countries

Hoverboarding in public is against the law in several nations, in contrast to the United States, where it is commonplace. It’s only going to become better and better as technology advances and safety features improve. 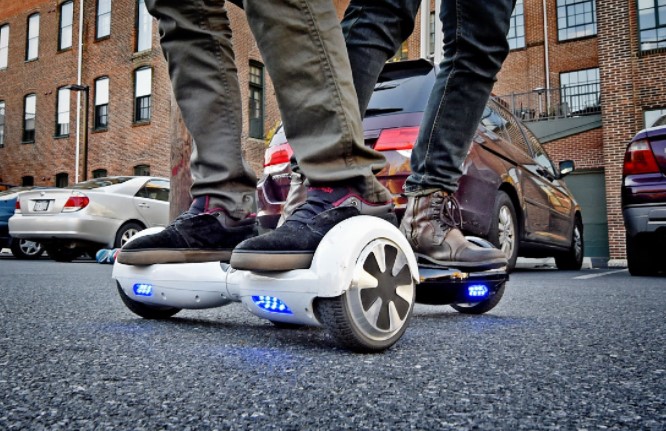 Hoverboards aren’t allowed on city sidewalks or streets in the city of London. Riders might face fines of up to £500 if they break the law. In the opinion of the Crown Prosecution Service, they are both unsafe and dangerous to ride on the road. They are only permitted on private property if the owners permit them. It is illegal in the United Kingdom to surf a hoverboard without an official permission document, and if you are caught, you face a fine and lengthy legal proceeding. In London’s parks, the London Royal Parks claims that the use of hoverboards is not prohibited, but rather restricted by notice in specified places.

Canada is a province that consists of many states. It is for this reason that the rules regarding hoverboards vary from province to province. It’s classified as a motorized scooter in several provinces. This makes sense because it’s not powered by humans. This indicates that it is not powered by human effort. Using a hoverboard is permissible in Canada. But hovering illegally along highways, roads, and sidewalks is common in many provinces. With the approval of the owner, they are permitted on private land. Because they are considered tiny vehicles in other jurisdictions, electric scooters cannot be licensed, insured, or registered in other states.

The city of Hong Kong has outlawed the use of public hoverboards. Hoverboards will soon be the subject of new laws, as the authorities are currently reexamining the ban and considering revisions.

Hoverboards are not permitted in any public area in Dubai, including the streets and any malls.

What Are The Penalties For Hoverboarding Law Violation?

Hoverboards can be ridden sideways in most nations, according to our extensive research. Self-balancing scooters are not considered motor vehicles in some jurisdictions in the United State; hence they are prohibited from being used on sidewalks and roadways. Except for New York, no other states in the United States have enacted legislation restricting the use of self-balancing scooters on public roadways and sidewalks.

After being seen on a Segway on the street in Barnsley, a 51-year-old man was the first person to be convicted for doing so. Phillip Coates was penalized £75 and had to pay a total of £265 in court costs for riding his motorcycle on the road. This case served as a key test for how the law views hoverboards. Even so, Lembit Opik, a former Liberal Democrat MP, argued that such law was out of date and should never be used to penalize anyone for using a device that is 170 years younger than the statute that governs it.

As originally stated, English and Welsh law forbade the use of pavement or footways for the “leading or driving of any horse… as… sheep… mule… swine… cattle or cart of whatever type.” The law in Scotland is more up to date, but the same regulations are enforced. The consequences may be far greater if you were operating a small vehicle on public roads. Driving a car without the proper authorizations or utilizing a vehicle with no insurance are two possible offenses for users. Unless you get permission from the landlord, you can only ride a hoverboard on private property.

A $250 punishment is now levied for each violation of the hoverboard safety regulations, thus failing to follow speed limit laws and not wearing a helmet would result in two separate fines. However, the number of penalties that can be accrued isn’t limited, and there are currently no additional penalties in addition to the initial one.

Airlines And Airports That Forbid Passengers From Using Hoverboards

All U.S. airlines have now banned the use of hoverboards because of the dangers posed by their combustible lithium-ion battery technology, which has been linked to several fires. Because of the high number of fires caused by Chinese hoverboard batteries, airports in the United States are requiring passengers to have their bags thoroughly checked before boarding. Minneapolis St. Paul International Airport in Minnesota is the only airport in the United States that prohibits the use of hoverboards within its facilities. These include Delta, Air France, Korean Airlines, Air Canada, and Emirates, which have all banned hoverboards.

When Is Riding A Hoverboard Against The Law?

Hoverboards can be ridden sideways in most nations, according to our extensive research. Self-balancing scooters are not considered motor vehicles in some jurisdictions in the United States; hence they are prohibited from being used on sidewalks and roadways. Except for New York, no other states have enacted legislation restricting the use of self-balancing bikes on public roadways and sidewalks.

However, there are just a few nations in the world that have been able to put in place laws on hoverboards that are truly amazing for everyone’s protection. Hoverboarding on public roads or sideways is generally prohibited in the United Kingdom, as determined by local authorities. (At the time of this post).

Hoverboarding Dangers And Injuries – What To Avoid?

We may not have a record of hoverboard death statistics. But even before they were widely available in stores and on social media due to hoverboard injuries 2020, hoverboards quickly became one of the most popular Christmas gifts. In contrast to Rep. Carlos Curbelo (R-FL), who released a tweet on how he ended up spending weeks in the hospital after attempting his nephew’s hoverboard, professional baseball player Dan Uggla was equally filmed falling backward off a hoverboard. 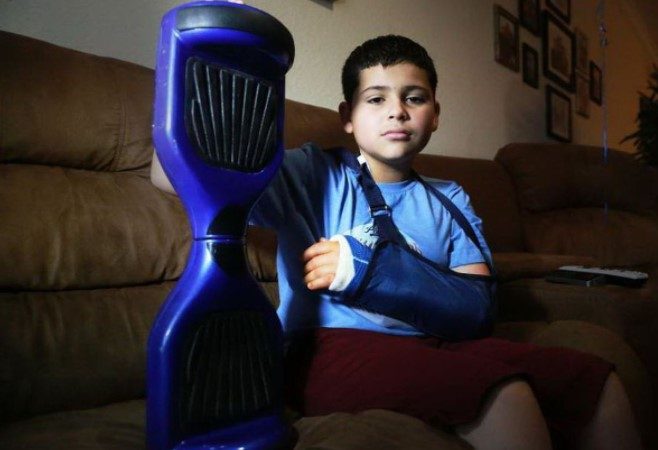 Hoverboard fire incidents are also being investigated by the (CPSC) – Consumer Product Safety Commission, in addition to the wipeouts. The devices have now been prohibited from flights by major airlines, which claim that the batteries could catch fire. More than a dozen people have been injured by hoverboards, according to the Consumer Product Safety Commission (CPSC). The CEO of Glitek, a hoverboard firm, appeared on “Good Morning America” today to provide his recommendations for safely gliding on a hoverboard following the safety measures that are included with the item.

Here are some hoverboard safety tips and what you should know:

Beginners will appreciate the high-quality construction of this entry-level masterpiece. At 7mph, it can travel 7 miles on a single charge, thanks to its two 200-watt motors. The use of gyroscopes makes navigating easier and more responsive. The highest weight that can be placed is 187.4 lbs, as it normally costs less than $99.99. 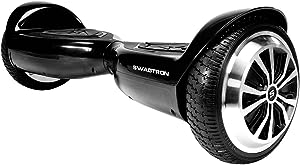 Music may be streamed from a smartphone to a set of speakers on a Bluetooth hoverboard. When the hoverboard is in use, the Bluetooth connection is automatically activated, and the signal can be detected. A beep will be heard once the board has been successfully connected to your smartphone. Consider the sound quality when shopping for a Bluetooth hoverboard. Hoverboards with decent bass and loud volume are hard to come by, but the Skque has both, which makes it about the best options available. 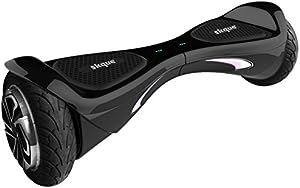 Ensure that you are aware of all local laws and restrictions before purchasing a hoverboard. Before purchasing an electric scooter, make sure you know what you’re getting yourself into. In the absence of a private residence, you may end up utilizing it on public sidewalks or streets. Hoverboarding in public is permissible if you follow the rules set forth by the city. As the law evolves, it’s important to stay up to date on the latest developments.